At Our Premium Alaska Outfitter outfitting is their full time business and they are truly All about The Largest Brown Bears in the World! They are long-time Alaskan, professional hunters, Alaska Registered Guide and Outfitter, USCG licensed captain, wildlife photographer, videographer, and owner-operator of their business

For over 30 years, they have been hunting in Alaska. Their world-class Alaska Peninsula Brown Bear and Sitka black-tailed deer habitat taxidermy is displayed at Ted Stevens Anchorage International Airport for all to view and enjoy.

They have had a strong commitment to and leadership role with many sportsmen organizations whose mission is to promote wildlife conservation and protect the freedom to hunt. Our owner has also served as Safari Club International Alaska Chapter Vice President, Board of Director, and Chairman of the Hunt Committee.  In 2016, they were recognized as the “Outstanding Member of the Year” for his exemplary service 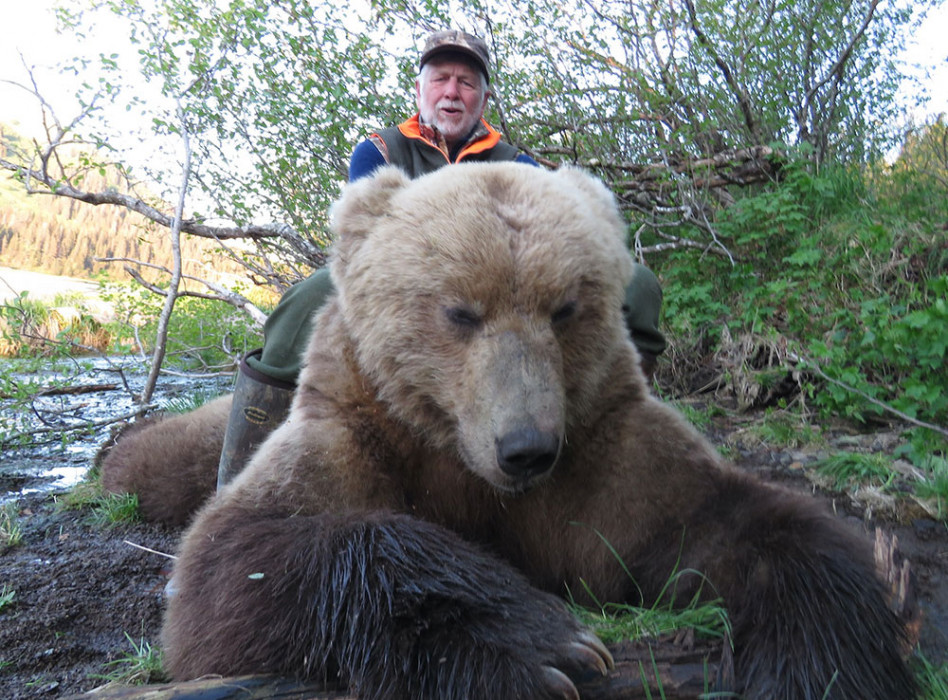 We hunt the big Alaska Peninsula Brown Bear on private native land concession in the heart of big bear country near Katmai National Park and Preserve. Alaska Peninsula is the best area in the world to hunt big trophy Brown Bear. We have one of the largest hunting concession on the Alaska Peninsula for Brown Bear with more than 30 miles of coastline in prime Brown Bear habitat. We manage our concession for the best trophy quality and overall population for our clients. We have a very high density of Brown Bear in our area to provide ample opportunities for our hunters. We have harvested bears in the upper 8 ft. to 10 ft. plus range.  Brown Bears in this area average 9 ft. plus squared. Typically, hunters see 10 to 15 plus bears while on their hunt.  Hunts are staged from our base camp which has heated Arctic Oven tents and Kitchen tents. We provide safe, comfortable, and highly successful trophy hunts. Spring seasons are May 10th – 31st of even numbered years and Fall seasons are October 1st – 21st of odd numbered years. On the Alaska Peninsula, you can shoot only one Brown Bear every four regulatory years. Method of take is rifle.  We've had an extremely high success rate on big Alaska Peninsula Brown Bears for many years.  Wolf is species of opportunity and available at no charge. Black Bear are available for trophy fee.

Most hunters are successful in getting their bear within 7 days.  non-hunters & videographers for $6,000 each person.

Wolf can be taken at no trophy fee. Hunt may be upgraded to include a trophy Black Bear for $3,500 trophy fee. 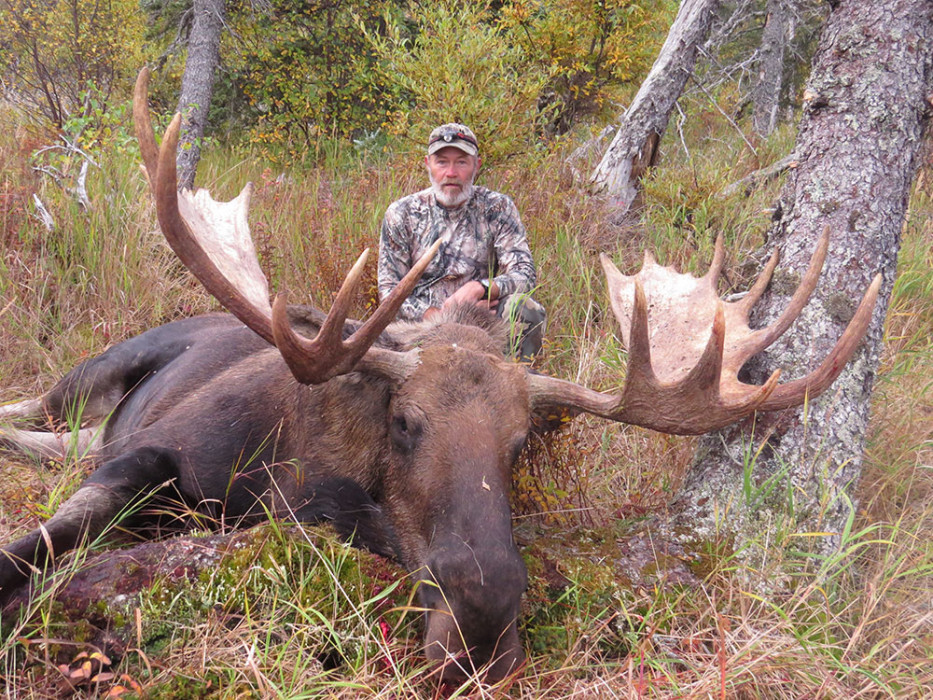 We hunt the big Alaska-Yukon Moose on the Alaska Peninsula on private native land concession in the heart of big moose country near Katmai National Park and Preserve. Alaska Peninsula is the best area in the world to hunt big trophy bull moose.

The Alaska-Yukon Moose are the largest subspecies of moose within North America.  In this area, trophy bull moose exceed over 60” in antler spread, with a few over 70”.  Nothing can get your heart rate to jump faster than seeing a moose, standing over 6 feet at the shoulders, being enticed by your guide’s call and raking during the rut.

We have one of the largest hunting concession on the Alaska Peninsula for Moose in prime moose habitat. We manage our concession for the best trophy quality and overall population for our clients. We have a very high density of moose in our area to provide ample opportunities for our hunters.

Typically, hunters see 10 to 15 plus moose while on their hunt.  Hunts are staged from our base camp and spike camps which have heated Arctic Oven tents and Kitchen tents. We provide safe, comfortable, and highly successful trophy hunts.  Moose season is September 5th – 15th.

We hunt on ridges for best vantage points overlooking vast drainages and hillsides in prime moose areas and glass for the flash of magnificent moose antlers.  We use calling and spot-and-stalk to harvest older mature bulls.  Method of take is rifle.  Success rate on big Alaska Peninsula for big moose is extremely high.  Black Bear and Wolverine are available for trophy fees. Wolf is species of opportunity and available at no charge.

Wolf can be taken at no charge. 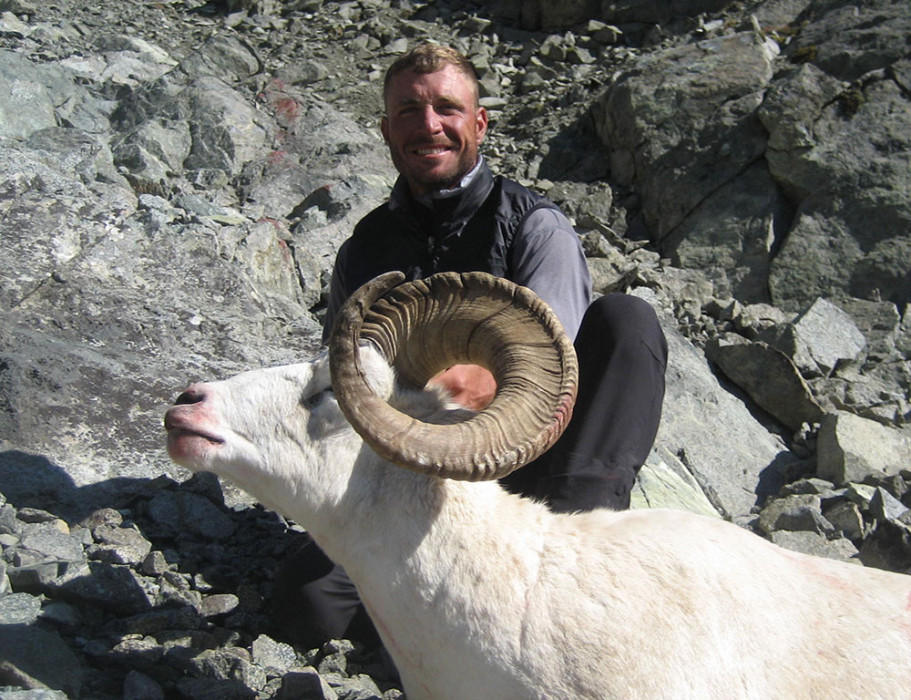 We hunt trophy Dall sheep in the Alaska Range, 125 miles from Anchorage, Alaska, one of the premier trophy Dall Sheep areas.  We have access to some great sheep country and trophy rams are often spotted right from base camp and many fine trophies have been harvested within one and a half miles from base camp. This is a fly-in base camp/spike camp and backpack-style hunt. Hunters need to be “sheep shape” ready and to be able to carry your own personal gear, 25 - 30 pounds in your backpack, rifle, plus 30 pounds with trophy. Hunters should be prepared to hike 2,500 feet in vertical elevation a day, while covering three to six miles on foot to/from spike camps. You can expect to stalk rams that are between 35” to 40” plus. Sheep harvested have been averaging nearly 37”. Typically, hunters see over 10 rams on their hunt. In recent years, clients have been over 90% successful in harvesting trophy rams and providing hunters with the opportunities at trophy rams.  By Alaska Hunting Regulation, you are required to harvest rams that have full-curl horns or larger, or ”broomed” on both sides, and at least eight years old. When hunting Dall sheep, the most important factor is your physical condition. It is safer if you are in good shape and it can mean the difference between taking an average ram or an exceptional ram; it makes the hunt more enjoyable and rewarding. We take a limited number of sheep hunters per season. Dall sheep tags can be purchased on-line with ADF&G or over-the-counter in Anchorage.  You do NOT need to draw a Dall sheep tag in our areas.  Come join us for the ultimate challenge in hunting the majestic Dall sheep! 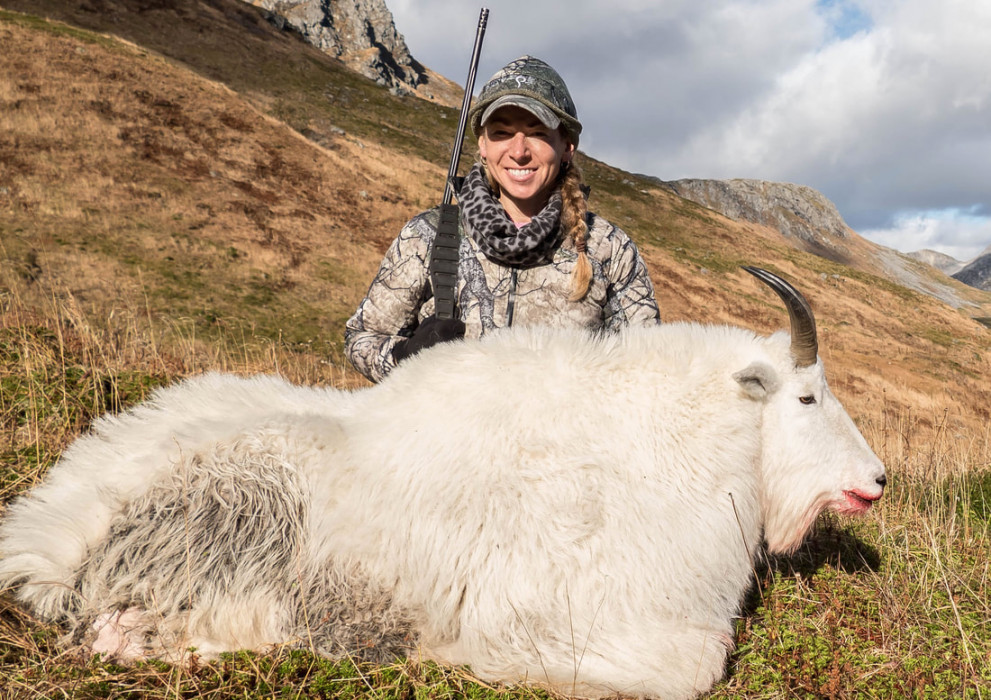 Prince William Sound hunts are conducted along the coastal glaciated alpine country, 175 miles south of Anchorage. From Anchorage, we travel across rugged mountainous and glacier terrain via air charter flight to glacier filled lakes and coastline. Our Mountain Goat camps are based on glacier filled alpine lakes and coastline. We have access to millions of acres of scenic coastal wilderness with abundant wildlife. Typically, Mountain Goats can be viewed from our base camps, rustic wilderness cabin or comfortable tent camps. On some occasions we use spike camps for easier access to goats. Also, we use Zodiac rafts on alpine lakes for easier accessing terrain and glassing for goats. Hunters do a moderate mountain backpack climb. Recommend hunters be in good to excellent physical shape and be willing to pack a reasonable amount of gear. Elevation range from sea level from 1,800’ to 3,000’. This is the ultimate spot-and-stalk hunt. During inclement weather, goats are forced down to lower terrain. Goats' prefer high-altitude cliffs, along with their magnificent white coats, makes them one of the most challenging and satisfying game animals in Alaska. Most hunts are done in two to three days with the exception of inclement weather days. Mountain goat horns range between 8″ - 10″, with a few billies making the record books. Arrival and departure point is Anchorage, Alaska. Clients may be upgrade hunt to include a trophy Black Bear.

Find out more about this location: